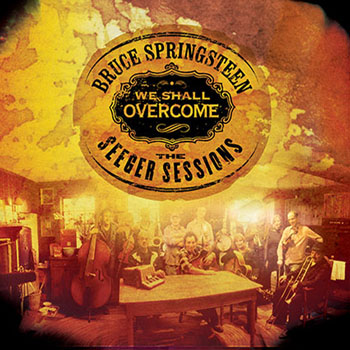 We Shall Overcome: The Seeger Sessions

"Mrs. McGraw," the sergeant said,
"Would you like A SOLDIER
Out of your son, Ted?
With a scarlet cloak and a BIG cocked hat,
Mrs. McGraw wouldn't you like that?"

NOW Mrs. McGraw lived on the SHORE
AND AFTER SEVEN years or more
SHE SPY'D A SHIP COMIN' IN ON THE BAY
WITH HER SON FROM FAR AWAY

"Oh, Captain dear, where have you been.
Have you been out sailin' on the Mediteren'.
Have you NEWS of my son Ted.
Is HE livin' or is he dead?"

THEN CAME Ted without any legs
And in their place two wooden pegs
She kissed him a dozen times or two
AND SAID "MY GOD TED IS IT YOU?"

"WERE you drunk or WERE you blind
When you left your two fine legs behind?
Or was it walking upon the sea
That WORE YOUR TWO FINE LEGS AWAY?"

"MY Teddy boy," the widow cried
"Your two fine legs WERE your MOTHERS pride "
stumps of a tree won't do at all
Why didn't you run from the cannon ball?"

We Shall Overcome: The Seeger Sessions