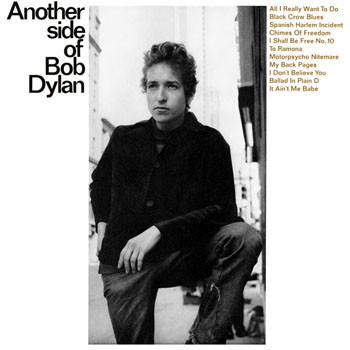 Another Side Of Bob Dylan

I Don't Believe You (She Acts Like We Never Have Met) es una canción interpretada por Bob Dylan, publicada en el álbum Another Side Of Bob Dylan en el año 1964.

Well I, I can't understand she let go of my hand
And left me here facing the wall
Yes, I'd sure like to know why she did go
But I can't get close to her at all

Yes I know from darkness, dreams are deserted too
But am I still dreaming yet?
Wish she'd unlock her voice once and talk
'Stead of acting like we never have met

If I didn't have to guess, I'd gladly confess
To anything I might've tried
If I was with her too long or have done something wrong
I wish she'd tell me what it is, I'll run and hide

I'm leavin' today, I'll be on my way
Of this I can't say very much
But if you want me to, I can be just like you
And pretend that we never have touched

And if anybody asks me
"Is it easy to forget?"
I'll say, "It's easily done, you just pick anyone
And pretend that you never have met"

Another Side Of Bob Dylan